Weaving Dreams, a project that will become fashionable

To support children in vulnerable situations who have been welcomed by the House of Dreams and Malabareando las Calles program, in August the project called “Weaving

Dreams” will be executed, which seeks to offer the opportunity for a productive project that allows for the self-sustainability of art and culture programs that street children receive in the Casa de los Sueños in Pereira.

This initiative has the fundamental support of Maria Luisa Ortiz, Colombian designer who was trained at the University of the Andes, where she took half of an economics degree and then went to study sewing in Paris, in the School of the Trade Union Chamber of Haute Couture.

There she learned her trade in a period of three years, dedicated to learning to sew, cut and make haute couture dresses.

On her return to Colombia she started her business on her father’s dining table; after a few years she opened a small haute couture workshop and in 2000 a boutique that lasted 13 years. 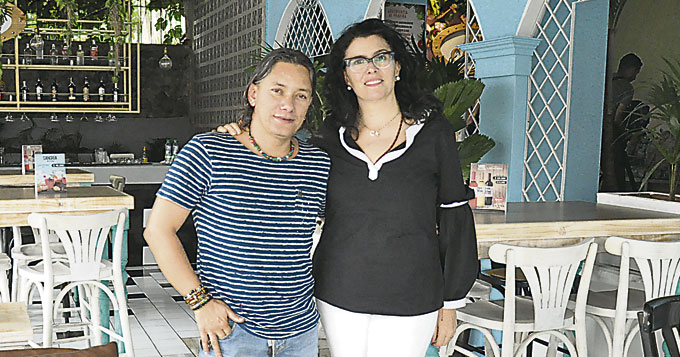 Later she continued not by making clothes to sell via retail but designing uniforms for the image of companies and people who are in customer service.

The designer also continues to make measurements and haute couture for her special clients, a job that, according to her, she carries out with “unbridled passion” and currently has a project called “I am Diego and María Luisa”, together with Diego Guarnizo, colleague costume designer and art director for Caracol TV.

The idea of this project is to work with the artisans from the tradition of Colombia.

The designer says there is a lot of information to create and to have a Colombian fashion DNA.

In the first stop of this project the musical accompaniment was in charge of César López with his musical group Alas de Prueba.  He is a musical artist recognized for social work and for peace, creator of the escopetarra and the 24-0 campaign. Thanks to César López, María Luisa Ortiz, met the Malabareando las Calles project and donated several sewing machines in December of 2017 for the execution of the Tejiendo Sueños project.

What does the project consist of?

Malabareando las calles is a project of search and attention of children and adolescents in a street situation, where the productive venture “Weaving Dreams” was born, in which the vulnerable children who have been welcomed by the program will be supported. The idea is to create a sewing workshop that allows children and young people to give life to the first urban clothing brand made by them and with the support of the renowned fashion designer María Luisa Ortiz and the University Foundation of the Andean Area. Starting in August, this project will be promoted by María Luisa Ortiz, as well as sixth semester students and teachers from Areandina who will contribute their knowledge and will accompany the children of Malabareando las Calles in the sewing process.

What is the purpose?

Generate emotional well-being for the boys, bearing in mind that the sewing and the use of the sewing machine create an empowerment when they manage to build the wardrobe that they will use and that they will later see in other people. In the future, it will be a tool for the personal and economic support of their families, as in the past when in Pereira the children were formed thanks to the effort of their mother behind a sewing machine.

How will this initiative impact society?

In a positive way, as long as we all contribute humanely. I believe that the students of the university when they do this work will have something in their soul that will never be forgotten and this will change their lives.

A message to call for aid to this project …

Leave some indifference behind. You cannot be indifferent to what surrounds us, the invitation is to get into the shoes of others and try to know where they come from and what problems they have had to be in the place where they are. We must know that the children who are on the street did not make this decision.

How long ago was Malabareando las Calles created?

We are celebrating one year today and we have a special event scheduled to celebrate in the Ciudad Victoria square at 6:30 pm where the attendees will see shows and presentations of the children, some local artists and we will present the results of our strategies, programs and new dreams and projects.

Who is the founder of Malabareando las Calles?

The project in Pereira was promoted by Jimmy Alexánder Abello and arose from the needs of a city for its children in street situations, sexual and commercial exploitation and child labor. At the state level, there is no proposal that goes and looks for children in these street contexts, that takes them out of consumption, off the street, off sexual exploitation, there is no institutional offer and, since they do not have any proposal, Malabareando las Calles arose, a project that seeks children under bridges, in residences, in parks, neighborhoods, bars and where they are located to take them out of those places and show them that there are other life options.

How do you approach children?

We make trips from 4:00 to 7:00 pm on Mondays and Wednesdays to find out what new children are on the street. On Mondays we look for them to know what happened to them after the weekend, to know if they are injured, hospitalized for episodes of overdose and consumption and on weekends we go from 8:00 pm to 3:00 am looking for girls in commercial sexual exploitation and children who are located under bridges. Initially they are invited to go to the House of Dreams, a space that we have where through art, yoga, painting, theater, music, dance, we show them that there are other life options, we heal the soul and let them dream about other possibilities. At the moment we are attending 143 children, but the population in street situation fluctuates, that is, they go once, they stop going two days and like that.

What are the strategies?

It works through several ways: first, we look for children on the streets they frequent, what day a week, at what time, what activities they carry out, who are behind those activities; second, we identify why they arrived on the streets, how long they have been on the streets, what they consume, if use several drugs. After knowing that reality we want to take them out of the street and that’s where the House of Dreams comes from, a space where we gradually withdraw them from the street. Third, the institutional strengthening, working with the educational system, because when a child is expelled from the classroom in a certain sector, that is putting them at risk of child labor, sexual exploitation and integration into groups outside the law.

Do you have institutional support?

We work with the Mayor’s Office, Family Welfare and the Government of Risaralda to articulate and be more rigorous and effective in the different activities that are carried out in the entities of the National Family Welfare system. A fourth result is the social mobilization, where every three months we make city events in the parks La Libertad, Olaya, Plaza de Bolívar and in the Plaza de Mercado, there through art we tell people an African motto: “Raising a child takes the whole tribe. ” In Pereira to get a child out of the street we need all citizens.