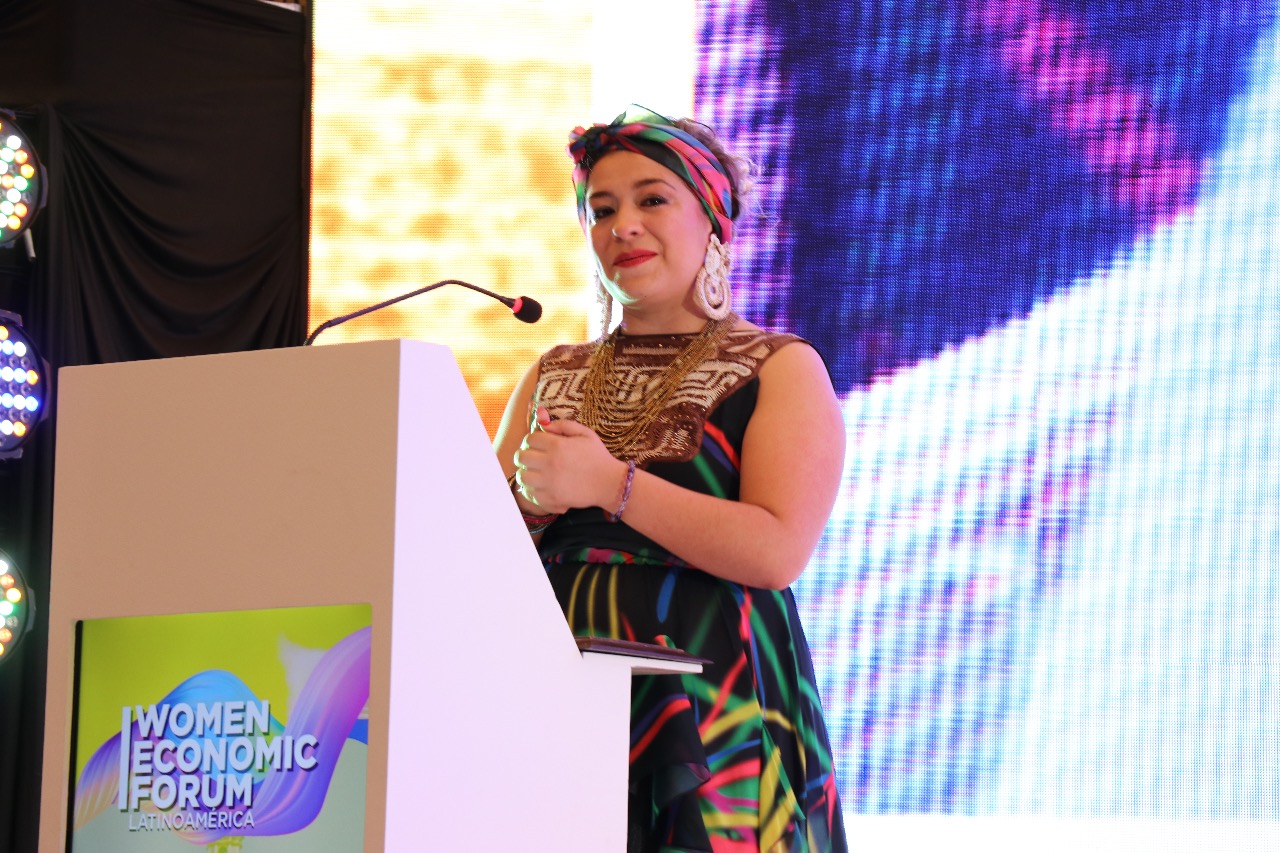 Nadia Sánchez, Founder and President of SHE IS, was the Director and head of the Women Economic Forum for Latin America, which was held last week in Cartagena, Colombia, on August 1,2 and 3 at the Hilton Hotel facilities. This event was attended by 47 national and international allies, among which was RECON. 1603 attendees from 29 countries, of which 21% were women.

With only 30 years of age, this woman administrator and manager of companies, leader, social entrepreneur, defender of women’s rights and leader of initiatives for gender equity, has established in a few years an admirable career as a leader and professional. Nadia has worked with women victims of armed conflict, indigenous; She has been a professor at the Javeriana University in matters of entrepreneurship and innovation, she was Consultant of the Integration and Trade Sector of the Inter-American Development Bank – IDB, Human Resources Analyst of the OAS, Consultant of the IDA ConnectAmericas Innovation Program, among others. Nadia has been the first Colombian woman to bring one of the most important events for the Women’s Economy: Women Economic Forum for Latin America. Event in which topics such as gender equality, economy and women’s activities for development, among others, were discussed. The Women Economic Forum is held annually in New Delhi, India, so it is a privilege to mention that Nadia Sánchez, has been the manager of such a great event for Colombia and Latin America.

In Latin America, the wage gap between men and women is one of the biggest challenges to achieve gender equity. The rate of this wage gap is between 30% and 40% as reported by Gabriela Ramos, Director of the Organization for Economic Cooperation and Development (OECD) and “Sherpa” of the G20 during the WEF. If women and men contributed equally to the social and economic development of Latin America, poverty levels would be reduced and a more just society would be given.

Nadia, together with her team of 12 people, 2 of them men and 10 are women, organized the First WEF in which topics of global interest were discussed, such as: Women’s creative leadership; How to achieve gender equity and reduce the gaps, Empowerment for entrepreneurship among other dialogues that hope to contribute to gender equity.

“Women represent only 13 percent of the land owners and worldwide, women earn only 77 cents for every dollar that men earn doing the same job,” according to figures from the United Nations Development Program – UNDP Forums, such as the WEF, are open spaces for the discussion of relevant issues that contribute to gender equity and promote solutions to bridge labor gaps between men and women. Within the framework of this important forum, the Great Global Pact for Gender Equality was signed. In this alliance, the Government of Colombia, the private sector and non-governmental entities pledged to promote actions aimed at reducing gaps that affect the development of women. Rigoberta Menchú, Nobel Peace Prize joined this important firm.

It should be noted that during the WEF Nadia, she received the recognition of “Women of the Decade” from Harbeen Arora, Founder of All Ladies League. “The true construction of peace is in the union of the diverse, the different, the magic of building country and region is in giving unconditional love without any limit,” said Nadia, after receiving this recognition that without a doubt, will be a voice of encouragement for Nadia to continue working with SHE IS, in favor of women and gender equity in Latin America.