More than 1,600 pregnant women from eight Colombian cities, of which about 100 were affected by the tragic avalanche that occurred a year ago in Mocoa, are beneficiaries of the program Cunas con amor, from the Fruto Bendito Foundation, which is inspired by a Finnish tradition that started 88 years ago.

Following that tradition, born in 1930, Fruto Bendito delivers cardboard cradles to pregnant mothers with fewer resources, with the main objective of reducing the baby mortality rate, in addition to promoting equality and love for children since pregnancy.

Thanks to this strategy, Finland managed to reduce the mortality rate of babies, from 65 deaths per 1,000 newborns, to only two per thousand, since the cribs, made with certified corrugated cardboard, represent safety and comfort.

The cradle delivered is accompanied by a mattress whose density offers a safe sleep to the child, because it does not allow it to turn around, thus avoiding the sudden infant death syndrome (SIDS) that, according to the Colombian Pediatric Society, between 2005 and 2011 resulted in the death of 2,664 children under one year of age. 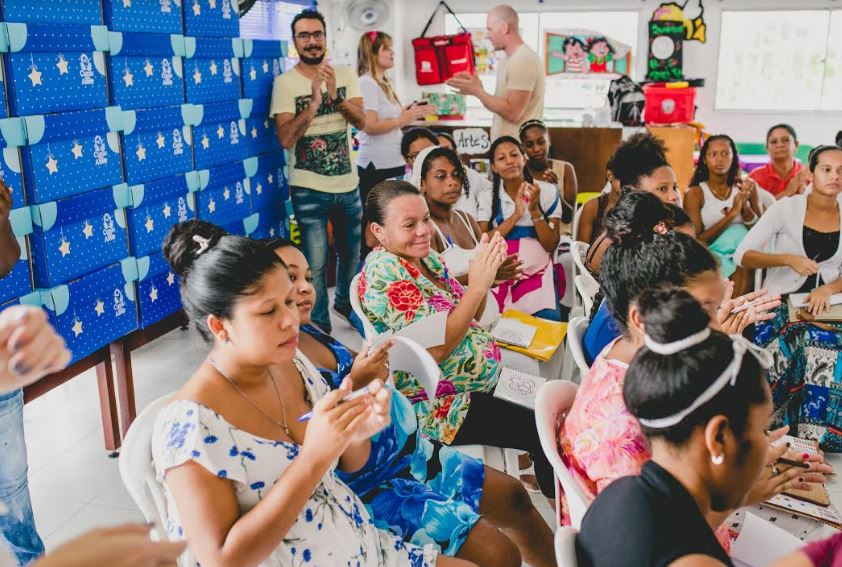 A need was transformed into entrepreneurship

Colombian Camila Cooper discovered the existence of cardboard cradles when studying in London, and saw in the news that the Finnish government gave one of these items to the Duchess of Cambridge, Kate Middleton. The roommate of Camila, originally from Finland, told her that these cradles are part of the idiosyncrasy of their country.

Already in Colombia, with a newborn child and on the verge of finishing her maternity leave, Camila decided that she wanted to accompany the child in early childhood, but for that

she needed some income. “It was when I remembered the cardboard cradles,” she said in a conversation with Colombia-inn.

Then she decided to start an enterprise that would allow her to share with her son in the first months of life and, second, to offer an alternative to mothers with economic limitations that prevent them from acquiring a crib for their babies.

With those objectives in mind, last year Camila gave birth to Fruto Bendito, the foundation that she started with her own resources, the support of the family, of Julieta Villegas, a specialist in babies, and of a group of experts in different branches, who have made Cunas con Amor, a comprehensive program.

The cradles are manufactured by the company Cartón de Colombia with certified corrugated cardboard, which guarantees the quality of the product that, generally, at the beginning arouses doubts and distrust on the part of the mothers.

Another factor of innovation of these elements is the ink with which their designs are printed. It’s about organic inks that do not involve risks in case the babies bite the crib.

Additionally, it is an easy to transport element, which allows the mother to always be at her son’s side, without having to leave the baby on a bed where they could fall.

“My son Gabriel is my product manager. He used his crib to sleep, he learned to sit there; He fell on the mattress and nothing happened to him. Then, when he was learning to walk, the crib served as a walker. Now that he is 22 months old, he uses it with the lid, to climb on it. That develops many motor skills, ” said Camila.

The cots delivered to low-income mothers are sponsored by public or private companies, as well as by natural persons, and each of them has a cost of 49,000 pesos. This value also includes a mattress, blanket, diapers, cleaning products, among other elements, but always depending on what the sponsor wants to be delivered to the pregnant mother.

In addition to the cribs and through the Blessed Plan, the foundation also promotes issues such as breastfeeding and education in the planning of children.

But Camila’s big dream is to start up the Fundación Casa Fruto Bendito, to welcome teenage mothers and offer them a second chance to get out of the cycle of poverty.

“The goal is for these mothers to be in the House with their baby, and that we can generate work for them because I am convinced that, if the adolescent is aware of what it is to be a mother, she will find value in the work that she undertakes, and thus we are going to break that cycle of poverty, ” Camila finally assured.